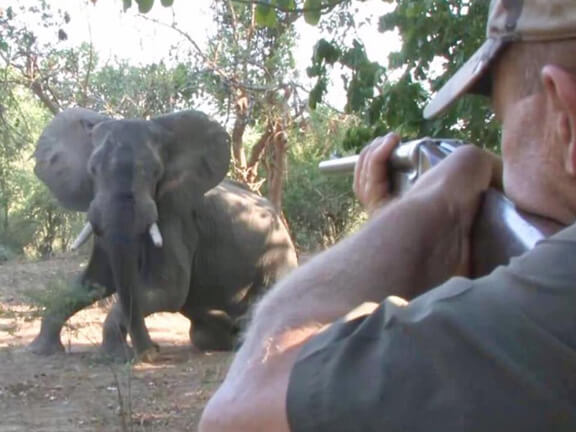 Elephants are threatened to extinction due to loss of habitat and poaching. A further decline in elephant numbers is caused by trophy hunting, where a small, foreign elite – in the true tradition of colonial rulers – is legally allowed to hunt down animals as a pastime. During the last CITES Conference of the Parties which was held in Johannesburg in 2016, the influential trophy hunting industry managed to negotiate a total of 1,000 elephant kills each year. (In 2017: 1188). [1]

If the trophy hunting businesses do not succeed in selling all their licenses this is mainly due to the fact that big parts of African hunting concessions are already devoid of elephants. Between 2001 and 2015, in the midst of the biggest ever poaching crisis, 81,572 elephant trophies (including tusks, hides, feet, tails etc.) were exported out of Africa [2]. Since all older bulls have been killed already and some hunters refuse to kill younger bulls, Namibia meanwhile even sells hunting permits to hunt down females [3].

Scientists have been observing that the intelligent pachyderms – driven by fear – are migrating into safer countries, e.g. Botswana, where trophy hunting was officially abolished in 2014 [4,5]. Frequently hunters are lurking in these escape routes with the intention of killing these elephants. In 2017 a downright massacre took place in the Caprivi Strip between Botswana to the south and Angola and Zambia to the north: the Caprivi is, however, national territory of Namibia and therefore hunting ground. The killings of amateur hunters are in no way less brutal as those of poachers. The gentle giants do not die immediately through the firearms which were developed to kill humans. The killing process is drawn out and a terrible torture for the sensitive animals which, already wounded, will be terrified and run for their lives.

In a deserted hunting camp in Bwabwata Park (Caprivi), apart from rotten meat, the skulls of 30 elephants were found – all of which had numerous bullet holes [6].

The powerful hunting lobby competes for exactly these customers – big game hunters – and makes a profit of about one billion dollars every year on the sell-out of wild animals. To ease their clients’ conscience, the powerful hunting lobby claims that trophy hunting supports conservation. Yet there are profiteers, not conservationists behind the scenes. Internet platforms achieve great turnovers for the respective hunting businesses, effectively advertising discount prices for the killing of the most impressive elephants.

Germany actively promotes trophy hunting and also supports it financially. Angola, Benin, Burkina Faso, Namibia, Niger, Zambia, Zimbabwe and Tanzania all get funded by Germany (–> hunting subsidies). The German Federal Government pumps millions of Euros, declared as development aid, into projects that are involved with trophy hunting, according to an official statement. In September 2017, the Federal Government’s reply to a parliamentary question put forward by Bündnis 90/Die Grünen revealed, that since 2006 alone 280.5 Million Euros were transferred to Africa for projects affiliated with hunting. The monies are to be used to improve the infrastructure for rangers, but also for trophy hunters. Hunting grounds are to be extended and new hunting concessions to be opened up.

Therefore it doesn’t come as a surprise that Germany is the second largest importer of hunting trophies after the USA. Between 2004 and 2015 alone, the Federal Agency for Nature Conservation (BfN) – which is the authority responsible for the import of hunting trophies – authorised the import of 162 taxidermied elephants, in addition to 900 tusks, 600 hides, 180 tails, 180 ears, 260 elephant feet and even genitals [8]. The very generous granting of authorisations is also valid for hunting methods which would be banned in Germany due to their cruelty.

In their justification the Federal Government goes along with the argumentation of two large, hunting-friendly associations, both of which get funded by the German government with 4.1 million Euro [7] for projects affiliated to hunting. According to an official statement, revenues made by trophy hunting are to benefit the local population and to protect animals from poaching.

Numerous scientific research and papers show a completely different picture: the local population earns a mere 30 cent per head of population per annum [9, 10, 11, 12, 13, 14,15] on the sale of expensive hunting licenses and on the subsidised big game hunting. The revenues from trophy hunting often disappear into murky channels and therefore there is reason to suspect that tax monies of German citizens are mainly being used to stabilise corrupt structures of African countries which are hunting destinations [16].

Trophy hunting as such leads to a further decline in numbers and has a negative impact on the genepool of the surviving animals – elephants included – which even the Frankfurt Zoological Society (ZGF) admits [17] ‘Sport-hunters’ prefer bulls with the biggest tusks – the untimely deaths of those bulls leads to a depletion of the genepool. More frequently elephants with crippled tusks or no tusks at all are being seen. The trophy hunting industry in turn now takes the opportunity to issue hunting licenses to trophy hunt female elephants without tusks. These licenses are being offered at dumping prices.

As far as the argument is concerned that trophy hunting might be an instrument against poaching, the record could hardly be more devastating: during the time when German tax monies were transferred to the Selous – Africa’s largest hunting area – the massacres of elephants reached biblical numbers. In 1976, 109,000 of the grey giants still lived in the Selous. Under the watchful eyes of the ZGF (which, according to their own information, has been committed for the past 30 years to supporting trophy hunting in the Selous area) 93,000 elephants were slaughtered within a few years – most of them after 2006. In all of German post-war politics one can hardly find an example where there is a wider gap between aspiration and reality.

The psychological effects on elephants who witnessed their family members’ gruesome deaths are being underestimated. They are traumatised and often aggressive towards other animals, towards humans or even against themselves. G.A. Bradshaw, an American ethologist who conducted her own long-term studies, sees parallels between the behaviour of these elephants and of people who experienced a genocide or other cruelties [18]. Often these animals are then being labelled ‘problem-elephants’ by authorities – and hunting permits will be issued.

The Ministry of Environment and Tourism in Namibia (MET) used exactly this reasoning to sell hunting licenses for the rare desert elephants which have adapted to the arid environment of the Namib and which are now threatened to extinction. 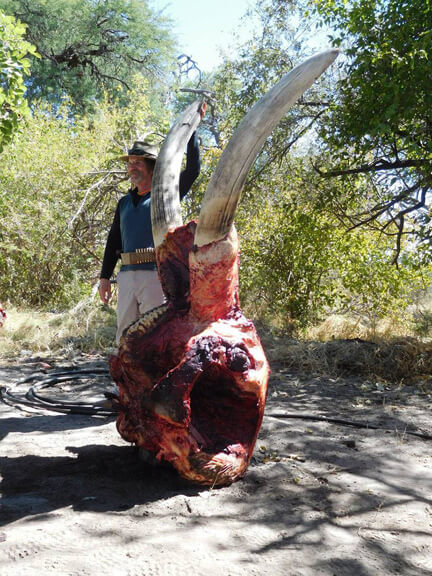 Due to their intelligence and their ability to pass on their unique knowledge to future generations, desert elephants are masters of survival – inhabiting one of the most arid regions in the world. Tourists from all over the world travel to Namibia to observe these legendary elephants. Only small groups of these animals exist, and many of them have been named. Unfortunately it is because of these very facts – their special status and their rareness – that they are sought-after by trophy hunters. The MET in Namibia seems to believe that in the short-term it is more profitable to keep selling licenses to trophy hunt the few remaining bulls. Their reasoning is, that genetically, these elephants are ‘normal’ African elephants. Sadly, the German Federal Government has no objections to the fact that the last desert elephants fall victim to greed. In autumn 2017, rich white trophy hunters shot three of five desert elephant bulls in the Ugab region, namely Kambonde, Tsaurab und Tusky. Voortrekker, an impressive and peaceful bull, has been protected by his worldwide popularity so far. Let’s hope it will stay this way.

What could a reasonable development policy look like, that would be beneficial for elephants and other wild animals? It is not sufficient to release hunting grounds. Taking into consideration that Africa is the continent with the highest population growth, these areas would be converted into agricultural areas within a very short period of time. Elephants would be killed off by loss of habitat to the same extent as they are being killed off by poaching and trophy hunting. Intelligent concepts are needed, and there are a few good examples to mention:

The Southern Tanzania Elephant Program (STEP) is working towards a peaceful coexistence between the local communities and elephants in a way that both people and animals can benefit from. STEP promotes beehive fences which deter elephants from raiding crops. At the same time, an income is generated for the locals who can sell the honey. Since the fields are not raided, there are no acts of revenge on elephants. This is one way to sustainably protect elephants that, in turn, attract tourists – which benefits the local population.

Exemplary work is also being done by the Big Life Foundation in Kenya, an organisation which supports the protection of elephants in Amboseli National Park – one of the most frequently visited areas by tourists in Kenya. Big Life also conducts workshops on sustainable agriculture and scholarship programs which offer new chances through better education and skills.

The promotion of photo- and ecotourism could open up new perspectives for many communities in ecological valuable and species-rich areas to overcome poverty and it could also help towards a constructive relationship between humans and elephants as well as other wild animals, thus leading to a decline in poaching. Sadly, these projects are hardly being funded by German development aid, whereas the killing of animals threatened to extinction is being subsidised with millions of Euros. We need to change this urgently!

Reportage on trophy hunting by Germans for animals that are threatened with extinction (Frontal21, ZDF):
www.zdf.de/politik/frontal-21/deutsche-auf-trophaeenjagd-lang-100.html

"Reconfiguring the protected areas in Africa" by Bertrand Chardonnet:
https://conservationaction.co.za/wp-content/uploads/2019/03/etudesAP_configAP_EN.pdf

Current reports and analyzes on the situation in Namibia, the model country of trophy hunting:
news.mongabay.com/2019/02/it-pays-but-does-it-stay-hunting-in-namibias-community-conservation-system/
www.dailymaverick.co.za/article/2019-03-20-troubled-times-for-namibian-wildlife/

Petition against the still possible import of hunting trophies to Germany:
www.change.org/p/the-federal-ministry-of-the-environment-and-conservation-germany-stop-the-import-of-hunting-trophies-of-protected-animals