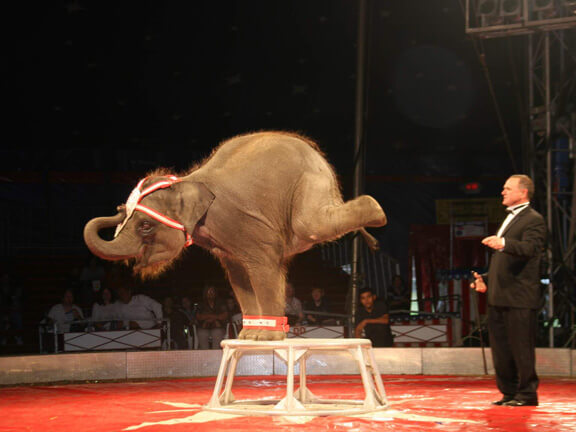 We are fundamentally against the practice of keeping elephants in captivity.  The needs and behaviour patterns of the highly intelligent and sensitive grey giants are not being met in captivity; the conditions do not meet the animals’ needs. In our opinion a natural life for the the species is only possible in the wild.

There are, however, situations in which elephants won’t be able to survive without the help of humans and must therefore be accommodated in appropriate shelters or sanctuaries.

Elephants are in distress almost always through human fault: elephant calves that have lost their mothers - because they have been poached or killed due to human-animal conflicts – are not able to survive on their own in the wild. Organisations such as the David Sheldrick Wildlife Trust (DSWT) or the Zimbabwe Elephant Nursery supported by us do exemplary work: elephant calves are being raised in their orphanages and later on released into their natural habitats.

Elephants which have been abused for many years in circuses, temples or tourist attractions almost always suffer from grave physical and emotional impairments. They are in need of intensive medical care and could not survive in the wild. There is an ever increasing number of sanctuaries trying to rescue elephants from such atrocious conditions and to enable them to spend their remaining years peacefully. We believe that both, orphanages as well as sanctuaries are worthy to be supported.

As explained above we principally insist on a discontinuation of keeping elephants in zoos. For as long as elephants are being kept in zoos, all endeavours which aim at improving the conditions under which the pachyderms live are to be welcomed. Certain progress has been achieved by some zoos. We want to highlight a few examples which have a positive impact on the animals’ living conditions.

Experts, such as Joyce Poole of ElephantVoices have put together criteria which zoos should take into consideration in order to make the living conditions of their elephants as endurable as possible: elephants are to be kept in groups; they are to be kept in protected contact, they must not be put in chains, elephant hooks (Ankush, bull hook) should be banned, mothers and calves must not be separated, nor elephants that are ‘friends’. The enclosures should offer maximum comfort for the elephants (bathing facilities, mud baths, scratch posts or – rocks, diversified options to keep them busy (mainly encouraging foraging). Elephant breeding programs should not be supported nor pursued – instead elephants which come from either circuses or zoos where they lived in solitary confinement should be taken in. Zoos should refrain from importing elephants which were captured from the wild.

A hotly debated topic is captive breeding. Zoos’ breeding programs to ensure species’ survival aim at stable numbers of as many species as possible. In principal it is recommendable to abstain from capturing wild species. Often species kept in zoos and bred in captivity are problematic, as it is the case with elephants.

Although we experienced an increase in the number of births, the majority of calves born in zoos only survived for a short period of time causing enormous emotional strain for their mothers. Apart from this, mainly male calves are born in captivity and to later on accommodate them poses a major challenge since most zoos have space for a number of females and calves but only for one or a maximum of two bulls.

Within the framework of the EEP (European Endangered Species Program) it is one goal to support the elephant populations living in the wild by giving their progeny (i.e. offspring of captive elephants) to re-introduction projects.

Indeed, we know of cases were this was done successfully and animals which were already extinct in the wild were successfully bred in captivity.  Examples: Przewalski’s horse, European bison and Dhama gazelle. These ‘revived’ populations show a low genetic diversity which could, however, be improved with good management.  In other cases species which were already reduced to small remaining-populations in the wild were stabilised by progenies coming from captive-bred animals. Examples: Alpine ibex, Pyrenean chamois, wildcat, lynx, Northern bald ibis and a number of South American Callitrichidae (belonging to the family of new world monkeys). This option is out of the question for elephants:  to re-introduce elephants which were born in zoos into the wild is simply not possible. The complex social structure and the way they pass down knowledge gained over generations – none of this can be achieved in a zoo. Besides, as mentioned earlier, elephant calves should never be separated from their mothers and the same goes for elephants which are ‘companions’.

One of the major threats to elephants living in the wild – the continuous loss of natural habitats – cannot be solved by captive breeding programs.  In Africa as well as in Asia the pachyderms’ habitats are shrinking dramatically.  In order to avoid the ensuing human-animal conflicts strategies must be developed.

From a nature conservation point of view only a limited part of the breeding programs seems to be useful and promising. From an animal welfare point of view this is a secondary discussion as the well-being of singular animals which already live in captivity is being discussed. Potential progenies for re-introduction programs play a minor part.

All in all only very few zoos partially fulfil the criteria listed above ensuring that the elephants are being kept appropriate to the species and even those zoos are to be considered as temporary solutions which cannot replace a good sanctuary or a life in the wild. Nevertheless, we appreciate all measures which aim at reducing the suffering of captive elephants.

OUR POSITIONS AND STATEMENTS

About the abuse of elephants with bullhooks:
https://www.elephantvoices.org/elephants-in-captivity-7/about-the-bull-hook.html/