Elephants in Zimbabwe are threatened by poaching and loss of their habitat. In the elephant orphanage ZEN (Zimbabwe Elephant Nursery) orphaned elephant babies are raised and later released into the wild. In cooperation with ZEN we have started our „Care for Elephants“ program. 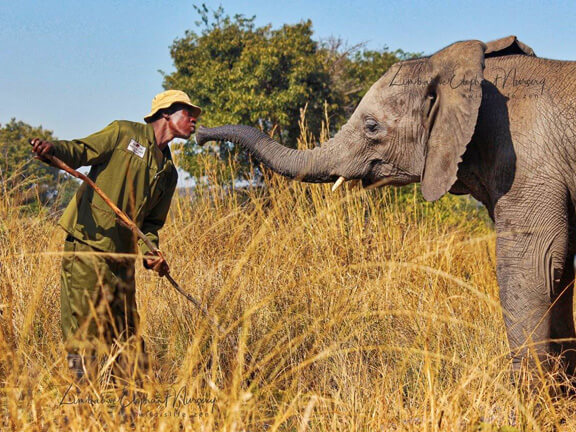 With a donation of 50 Euro per year you are supporting an elephant calf of your choice that is meticulously hand-raised and prepared for an independent life in the wild. We guarantee that 100 % of your donation will benefit the elephants and provide special milk formula, feed, loving care of the keepers and veterinary care.

For your donation you will get a donation receipt from us. We will be pleased to send you a personal certificate plus photos of your chosen elephant. We also inform you regularly about the welfare of your protégé. You are also welcome to visit the elephant calves at the ZEN nursery in Harare. 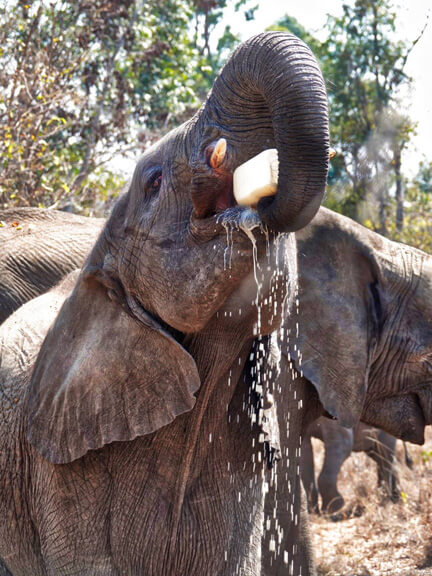 Moyo is the first elephant calf rescued by ZEN. The tiny baby was found wandering all alone on the shore of Lake Kariba. All efforts to locate her family failed. No elephants were sighted in this area. After several days alone in the bush little Moyo was followed by a pack of hyenas. ZEN decided to intervene and brought Moyo to Harare by plane.

On arrival she was tiny and weighed only 56 kg! (Helathy elephant babies usually weigh around 90 kg at birth). Now she weighs around 300 kg and is doing fine.

Support Moyo with a donation of 50 Euro per year. Please include the keyword Moyo in your donation. Write us a short e-mail with your address so that we can send you the Care for Elephant certificate. In addition, you will receive news of the development of Moyo at irregular intervals. Many Thanks! 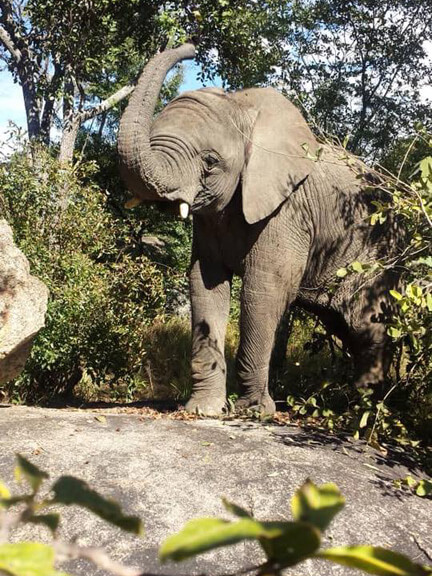 Kukurakura a.k.a. Kura, which means “to tell a story”, was part of a group of 3 elephants given to ZEN for rehabilitation and eventual release by ZimParks. These 3 elephants had a very traumatic experience before they arrived in the nursery. They all suffered severe injuries prior to their arrival at ZEN and hence were not suitable for relocation.

Kura sustained a severe injury to his back left leg. Soon after he arrived an X-Ray was arranged in order to determine the extent of the injury. His leg was shattered in two places and has fused around the entire joint. He still manages to walk fine, although avoiding to bend his knee a lot. He is the dominant bull in the herd and possibly the most complex individual. Initially he was very wary of people, in the meantime he is rebuilding his trust.

Support Kura with a donation of 50 Euro per year. Please include the keyword Kura in your donation. Write us a short e-mail with your address so that we can send you the Care for Elephant certificate. In addition, you will receive news of the development of Kura at irregular intervals. Many Thanks! 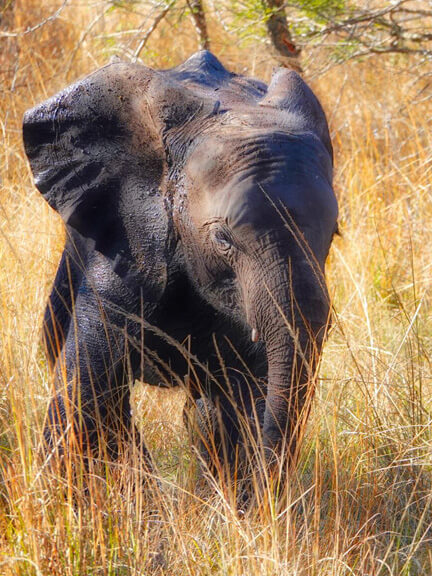 Marsie was saved from certain death by the ZimParks and Wildlife Management Authority. The young calf was found wandering alone close by a watering hole, bravely fighting off  hyenas that were surrounding her. It is assumed that her mother was killed by poachers near the border of a national park. ZimParks mobilised their team after having watched this young elephant for some time.

When the rescued calf was brought to the ZEN nursery she was starved and had an abcess on her behind. Greatly helped by the gentle and loving support of Moyo and Kura and by the selfless care of the Zen team the little elephant has settled down well in the small herd.

Support Marsie with a donation of 50 Euro per year. Please include the keyword Marsie in your donation. Write us a short e-mail with your address so that we can send you the Care for Elephant certificate. In addition, you will receive news of the development of Marsie at irregular intervals. Many Thanks! 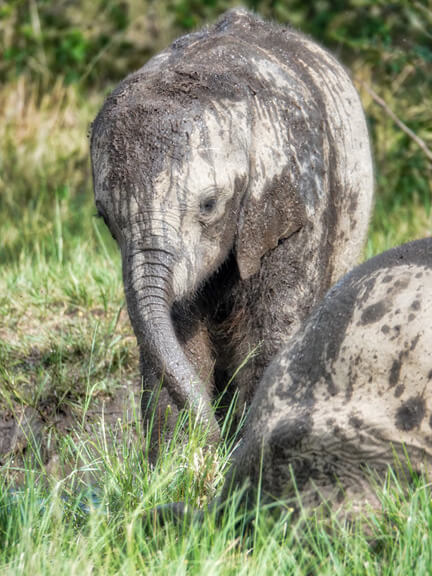 Unity comes from the Umfurudzi Wildlife Area. There was a severe drought in this area last year, which also affected the elephants. Unity received too little milk from her mother and was eventually rejected by her. However, elephants of this age urgently need milk to survive. When she was admitted to the Nursery, she was malnourished and disturbed. Fortunately, a special, very nutritious milk formula was found that does not cause diarrhea and which Unity tolerates well. She has gained over 10 kg within four weeks and dominates the Nursery with her strong character!

The little fighter is not out of danger yet and will stay in intensive care for a few more months. But with the loving care of her caregivers and the collective love of the other rescued elephants, she has made great strides. Moyo has taken on the role of substitute mother for Unity and is doing an excellent job!

Support Unity with a donation of 50 Euro per year. Please include the keyword Unity in your donation. Write us a short e-mail with your address so that we can send you the Care for Elephant certificate. In addition, you will receive news of the development of Unity at irregular intervals. Many Thanks! 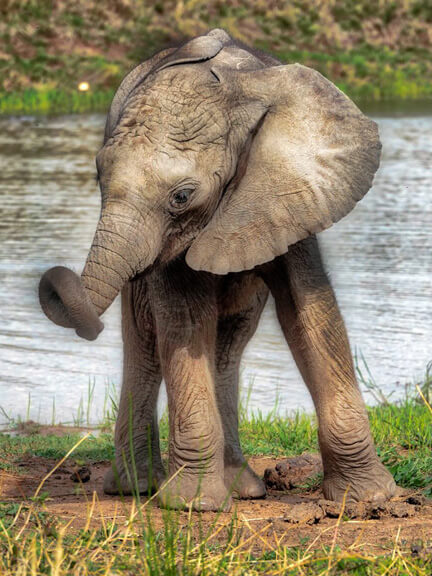 Coco's mother was killed by a bus in Zimbabwe's northwestern region. For the little Coco this must have been a horrible experience. The traumatized calf ran screaming and fearful and panic-stricken. Fortunately, rangers from Zimbabwe Parks and Wildlife Management Authority made it quickly to the scene and managed to capture Coco before it fell prey to predators.

The baby was stabilized in the nursery and also receives a special, particularly nutritious milk formula. The two older orphans Moyo and Unity have taken the little Coco lovingly into their care.

Support Coco with a donation of 50 Euro per year. Please include the keyword Coco in your donation. Write us a short e-mail with your address so that we can send you the Care for Elephant certificate. In addition, you will receive news of the development of Coco at irregular intervals. Many Thanks! 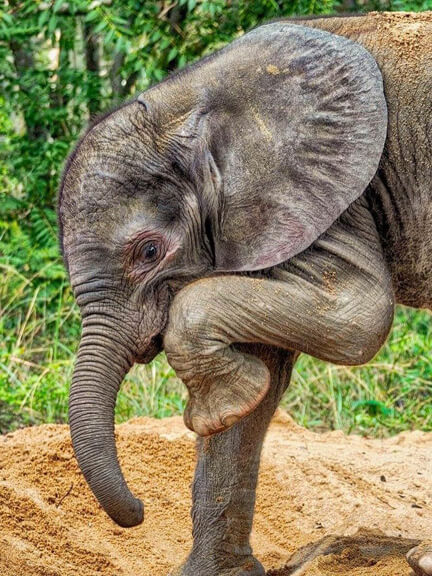 At the end of November 2018, a baby elephant saw the light of day on the banks of the Limpopo River. On shaky legs and with still poor eyesight, the little one struggled to keep up with the herd. But the scorching heat took its toll: In order to survive, the elephant family had to find water quickly. The desperate mother had to choose between the collective need of the herd and her baby - the baby stayed behind. Alone, traumatized and hungry. But the little fighter stayed on his feet and had no intention of giving up.

Fortunately, Limpopo was found in time, taken to a farm and provided with lifesaving water. Lovingly cared for and protected, the little one was finally able to sleep peacefully. The next morning he was flown north and taken to the nursery in Harare. Here he is surrounded by other elephant children, who feed him as their nest-hook. Also by the caregivers, the small Limpopo is cared for.

Support Limpopo with a donation of 50 Euro per year. Please include the keyword Limpopo in your donation. Write us a short e-mail with your address so that we can send you the Care for Elephant certificate. In addition, you will receive news of the development of Limpopo at irregular intervals. Many Thanks!

There are news about the orphans!
Read our Report from July 2019. 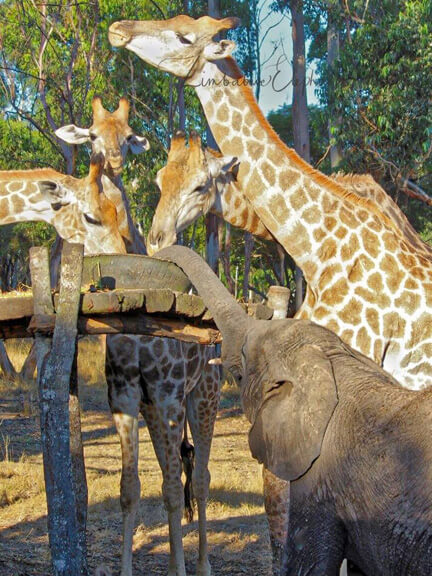 Elephants in Zimbabwe are fighting for survival. Like in many African countries poaching of elephants is rampant, and the iconic pachyderms are also struggling with a dramatic loss of their habitats and widespread human/elephant conflict. Some regions in the north of Zimbabwe have lost between 40 % and 70 % of their elephant population since 2006.

Elephant calves are often the survivors of such calamities. But without their mother and herd they are doomed to die.

In Zimbabwe the Zimbabwe Elephant Nursery (ZEN) takes care of these lost babies. The orphans are looked after around the clock and lovingly nursed back to health, in order to eventually release them back into the wild. But hand-raising elephant calves is a long and elaborate process.

Until the age of approximately three years, elephant calves are dependent on their mothers milk. Therefore the orphans have to be bottle-fed with a special milk formula. Particularly newly born elephant babies (under 1 month old) require highly sophisticated care. Every calf needs a minimum of 4 keepers doing 8-hour-shifts, day and night. 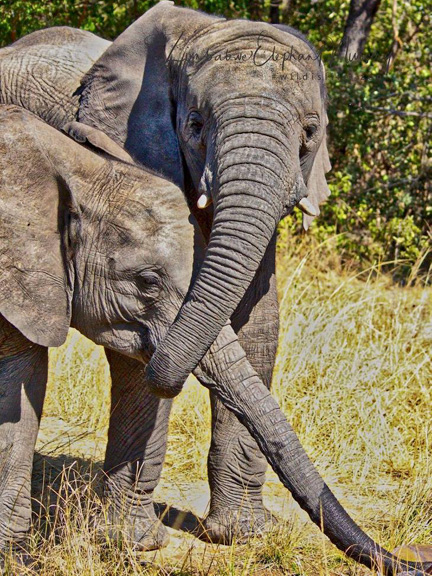 Once the young elephants are strong and old enough, they are introduced gradually to an independent life in the wild. This happens in a protected reserve near the Victoria Falls.

The ZEN nursery itself is situated close to the airport in a suburb of Harare and is open to visitors. Besides elephant calves, all kinds of orphaned or handicapped animals are taken care of – in order to release them back into the wild if possible.

The ZEN project was founded 2013 in cooperation of the private Wild is Life Trust and the public Zimbabwe Parks and Wildlife Management Authority (ZPWMA), in order to ensure the rescue and rehabilitation of orphaned elephants in Zimbabwe.

The rehabilitation of rescued elephant calves takes place in a specially designed nursery at Wild is Life Sanctuary near Harare Airport, including 330 hectares of wild land where the pachyderms can roam safely each day. There is a capacity for up to 10 rescued elephants.

2) Back into the Wild

Once the elephants are strong and old enough, they enter the second stage of the program: Step by step they are introduced to an independent life in the wilderness. Their new home is situated in a protected area comprising 1550 hectares of prime wildlife habitat which was leased by Wild is Life for 25 years in 2017. The area forms the southern boundary to Zambezi National Park close to Victoria Falls.

As part of ZEN’s vision to protect elephants and their habitat in the long term, the goal is to secure and manage the entire Panda Masuie Forest Area (33 500 hectares). It is at a very critical position, situated in between 4 different Protected Areas namely Zambezi National Park, Kazuma Pan National Park, Matetsi Safari Area and Woodlands Estate.

The securing of the area will safeguard critical elephant habitat, provide security for elephants and increase connectivity between populations by establishing a safe corridor between protected areas.

Get our "Care for Elephants" flyer:
Download Center Flyer