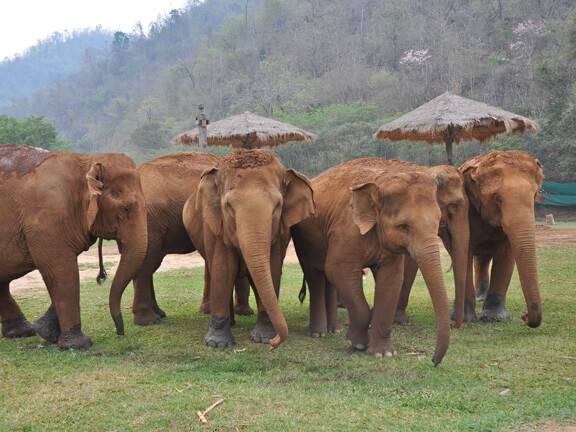 In Thailand we support the Save Elephant Foundation, including the model project Elephant Nature Park (ENP), founded by Lek Chailert. This internationally renowned elephant activist has rescued a formidable number of elephants and also create awareness for the plight of captive and wild elephants on a massive scale, not only in Thailand but also in other countries. As a result, many travel companies have stopped promoting elephant riding or entertainment with elephants like circus shows, elephants painting pictures or giving “massages” to tourists. Every single elephant that is involved in these activities has suffered massive torture and pain (see paragraph “The Horror of Phajaan” below and here). In the idyllic surroundings of ENP these previously abused pachyderms enjoy loving care and a great amount of freedom. Moreover, the gentle giants act as charismatic ambassadors highlighting the tragic situation of this  endangered species for visitors from all over the world. 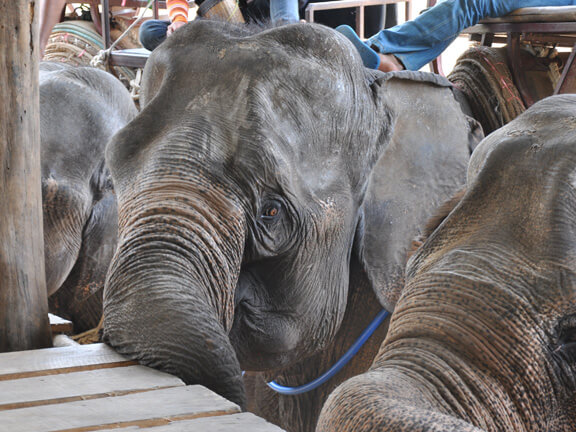 In Thailand there are only about 1500 elephants left in the wild. More than 2500 elephants are living in captivity, harshly exploited for the tourism industry, forced breeding, and illegal logging. In order to put an end to the immense suffering of captive elephants and also save the remaining population in the wild, it is vital to educate the public about the plight of the sensitive pachyderms and also stop the  abuse. The fact that there is profit to be made out of “using” elephants for various purposes poses an imminent threat to the wild population as well. At the same time, it is of vital importance to protect the remaining habitats.

The Horror of Phajaan („The Crush“) 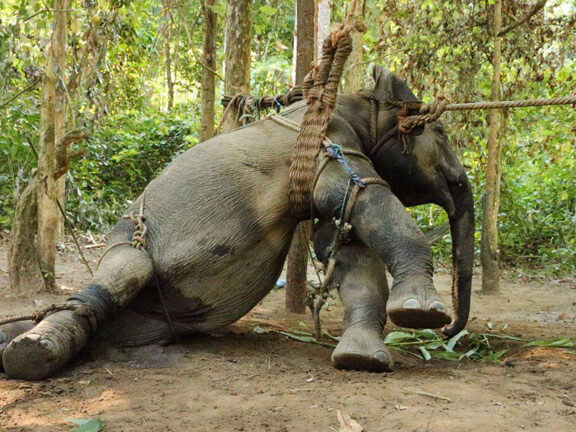 Every single elephant that is forced to give rides, perform tricks or paint pictures has suffered unimaginable torture at a very young age. The horrifying procedure of Phajaan (the crush) has been practised in Asia for centuries. Baby elephants are shackled into a narrow “crush box” and tortured for days or weeks. They are beaten on the head and other sensitive body parts with a pointed metal hook, nails are being driven into the highly sensitive ears and feet, fire and excessive noise as well as the withdrawal of food and water are used to inflict further pain and panic – and “crush the spirit” of the baby elephants. Many baby elephants die from the abuse. The ones that survive will never forget the Phajaan. The extreme experience of pain and submission can later be triggered merely by a movement of the arm or slight touch with the hook. 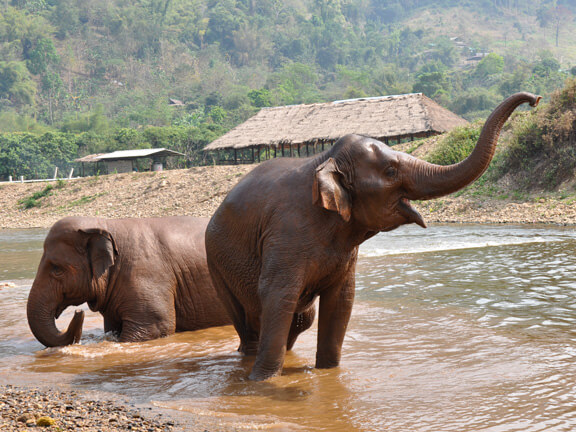 Meanwhile the reality of Phajaan, formerly hushed-up, has become a public issue – and earned massive criticism. This is largely due to the dedication and determination of Lek Chailert, who is leaving no stone unturned to improve the situation of elephants. Many elephant camps around Chiang Mai in the north of Thailand have stopped doing elephant rides. They advertise with slogans like “no hook, no chain, no riding” and offer elephant-friendly activities: Guests can walk with the elephants, feed them and watch them mud bathing or splashing in the river. In the tourist areas in the South of Thailand the change is still at the early stages. But this is an important step leading to a better future for elephants.

The Saddle Off Concept 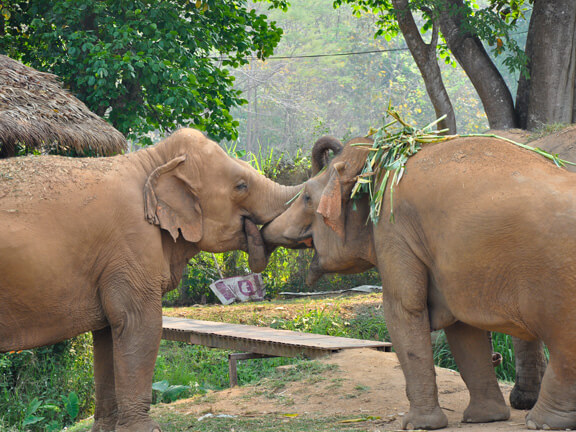 The founder of the Save Elephant Foundation Lek Chailert negotiates with the owners of existing elephant camps and offers them concepts, incentives and cooperations in order to motivate them to shift to a more elephant-friendly program. A considerable number of camps have done this already! The tourist seem to higly appreciate the experience of watching happy elephants, doing what elephants like to do. Lek is also working outside of Thailand in order to promote the change, i.e. in Laos or Cambodia.

Sanctuary for Elephants and other Animals 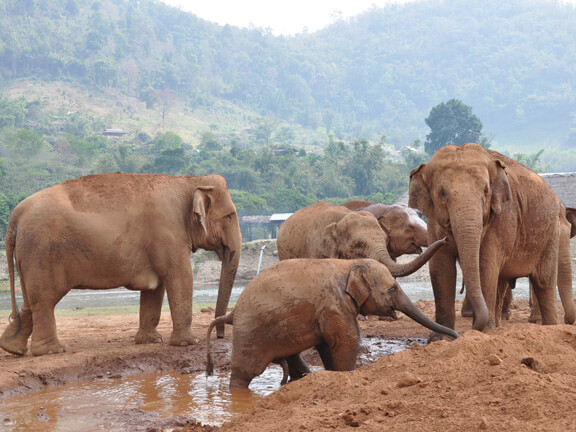 Many people who have visited Elephant Nature Park consider it a magical place. About 80 elephants rescued from abuse have found a refuge, where they can find a new lease of life and rediscover their elephant spirit. Nearly all of them suffer from severe physical and psychological trauma when they arrive. Even more important than the loving care and medical treatment each individual receives are the “healing powers of the herd”: Most of the newcomers are integrated in one of the existing small groups or even a herd, or they find a friend for life among their fellow pachyderms. Watching these affectionate bonds is one of  the most touching experiences in ENP.

The ENP offers numerous possibilities for the members of local communities to make a living. Many work there as mahouts, building and maintaining houses, stables oder fences, preparing the food etc. Lek has encouraged the farmers  to plant organic fruit and vegetables and buys the produce off them, feeding the elephants as well as staff, volunteers and guests. The food is completely vegan and tastes incredibly good. There is also a sustainable jungle-coffee project. The coffee plants are grown under the trees, so that the forest stays intact.

Some women from the local communities offer traditional Thai massage in ENP, and may keep 100 % of the proceeds. This also goes for the women who are offering washing service for the volunteers. A dance project where women and girls practise traditional dances and do shows for the guests is also a success. The mahouts carve wooden elephants that are sold in the ENP souvenir shop and also get the full price for their work.

ENP: Strategy and Plans for the Future 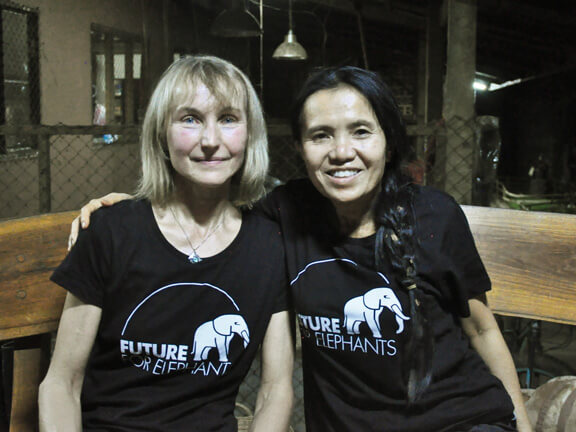 The visitors of ENP not only experience happy elephants in beautiful surroundings, they are also informed about the plight of elephants in Thailand and Asia. The often tragic backgrounds of the elephants rescued from the tourism industry, logging or forced breeding, impressively illustrate the desperate situation of the gentle giants. After their stay at ENP, many guests and volunteers are inspired to spread the message and create awareness back home in their own countries.

In the near future Lek and her husband Darrick are planning to move a part of the elephants into big, fenced-in areas where they can live half-wild. This is possible for two biggish and well-functioning  groups of elephants - including babies – that are not in need of specific medical care; and also for the three adult bulls living in separate enclosures as yet. A part of the required land has already been purchased. Another piece of land suitable for the purpose has been located, but not yet financed.

If you would like to support the projects of Lek Chailert you can donate here, adding the keyword “Lek Chailert”: DONATE

ELEPHANT ABUSE FOR THE TOURISM INDUSTRY

The following pictures show how elephants are still abused for tourism in Thailand. The bullhook is always present. Each elephant on which a tourist rides or with whom a tourist poses for a photo was snatched from his mother at a young age and tortured in a crash box until he lost his will. The elephants who survived this "Phajaan" procedure recognize their mothers no longer. 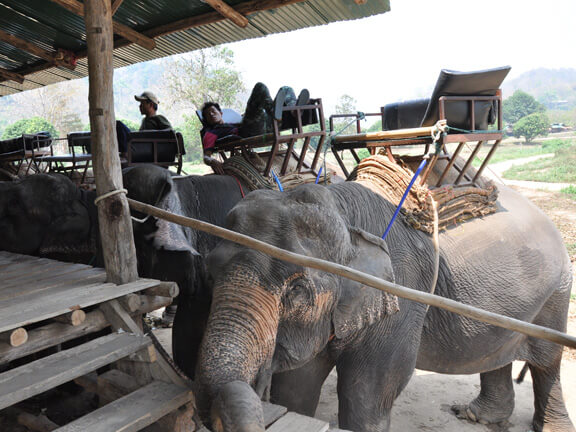 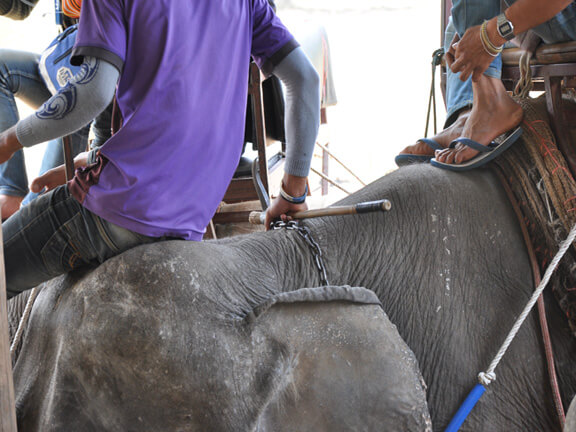 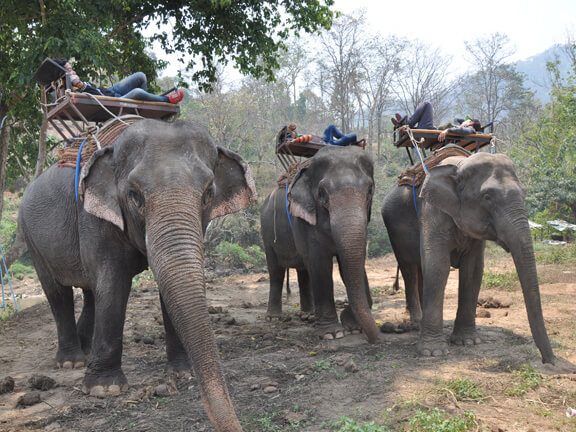 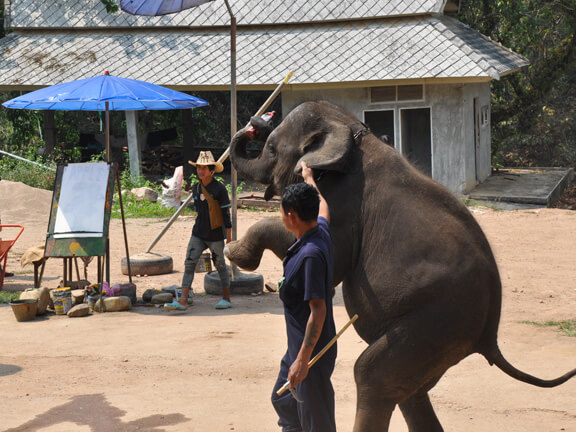 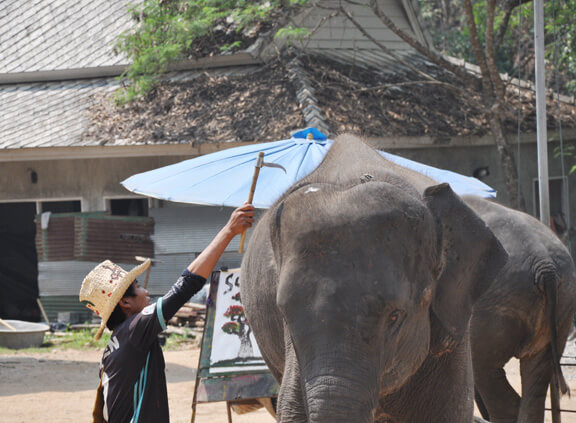 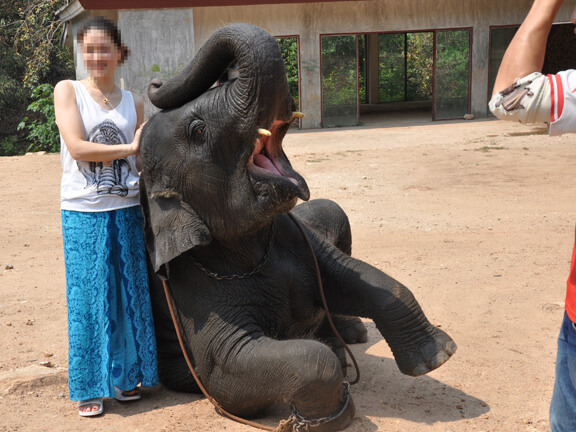 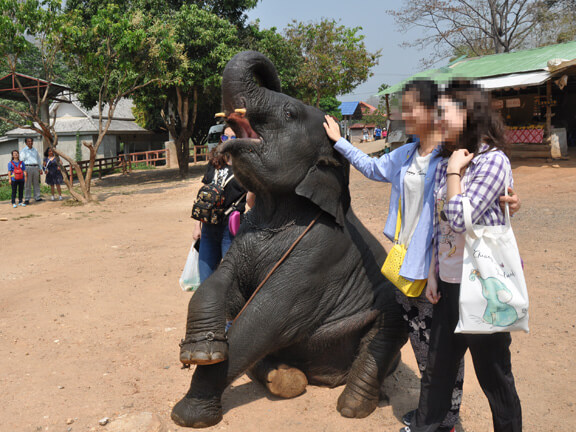 The aggravation of the situation for the elephants in Thailand and the fight Lek Chailerts, Süddeutsche Zeitung, 22 April 2020:
Discarded attractions

Media reports about Lek Chailert and her work: