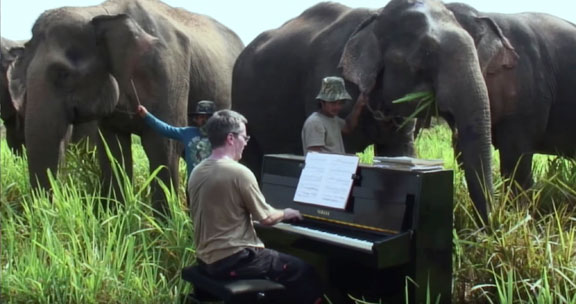 NOT CUTE: Elephants and the pianist Paul Barton

Do elephants love Bach? The idea of elephants enjoying classical music somehow appeals to us. The gentle giants are famous for their sensitivity and sophistication, after all. But there is a truly dark side to the many videos circulating in social media, showing how the British pianist Paul Barton plays well-known classical pieces for elephants. What is happening there is unfortunately not musical therapy for traumatised pachyderms as the videos suggest, but a nasty commercial stunt – and, above all, plain abuse.

Looking more closely it becomes obvious, that the elephants do not act as concert audience out of their own free will. The camera perspective is usually chosen so that the mahouts are not visible in the picture. But now and again when an elephant moves unexpectedly, a mahout - who is standing out of sight on the other side of the elephant - briefly comes into view. His job is to keep the animal in check and prevent it from leaving the scene, using chains, sticks or bullhooks.

An inexperienced viewer will hardly notice the tell-tale moments. But anyone who has observed the sad spectacle of elephants made to paint or perform circus tricks in Thailand can read the signs: Mahouts are standing right near the elephants ear, using sharp pins or bullhooks, or pulling the sensitive bodypart with their fingers. But the crux is, that all these elephants have gone through the heartbreakingly brutal procedure of the “crush” or “phajaan” at a very young age. That is the sole reason why they can be controlled by mahouts later on in their life. In the light of this cruel background it becomes clear, that elephants are far from listening happily to the piano in these vids. In fact they obey commands and are still slaves in a torturous system.

The choice of elephant camps that Paul Barton cooperates with also reveals the true nature of the “playing piano for elephants” operation. Several videos were filmed at Elephant Stay – one of the most disreputable elephant businesses in Thailand! All the no-gos in elephant-friendly concepts are happening at Elephant Stay: The elephants are chained, they have to give rides and they are beaten with bullhooks. In addition, the founder of Elephant Stay is one of the most influential players in the international trade in elephants, a big part of it certainly illegal. In the videos that were filmed at Elephant Stay, a mahout can be seen sitting on the elephants neck, bashing the animal with his feet when it tries to move away. Another scene shows a mahout rattling the chain hanging around the elephants neck, in order to make it move to the music or bang its trunk on the keyboard.

The other company that is involved with these videos is Elephants World, which falsely presents itself as a “sanctuary” for former trekking elephants. Bullhooks and chains are also used at Elephants World. In addition, elephants are forced to bathe and let themselves be scrubbed by masses of visitors, which results in enormous stress for the pachyderms. In the videos filmed at Elephants World the mahouts act a little less offensive, and not so obvious. But the principle is the same. Some elephants also show stereotypical swaying of their heads or bodies, which is not a sign of musicality, but indicates physical and mental suffering.

What is behind all this, not surprisingly, is making profit. With the short video clips circulating on a huge scale Paul Barton promotes his film "Music for Elephants", which can be purchased online. He also creates an image of himself as a selfless idealist who is playing for formerly abused elephants, “healing their souls”. This is very unfortunate, as in doing so he takes part in elephant abuse himself.

The piano videos as well as the abominable “Elephant Orchestra”, that Richard Lair makes money with in Northern Thailand, say nothing about the actual musicality of elephants. It is known that the communicative gentle giants are receptive to sounds and tones. Lek Chailert, the world-famous founder of Save Elephant Foundation and rescuer of more than two hundred elephants, is known to sing lullabys for troubled pachyderms in her Elephant Nature Park. That they have a calming effect can also bee seen in videos on social media – and the viewer can be sure that there are no hooks or chains involved, and that these elephants will never again have to give rides.

Credit:
The photo above is taken from this video: https://www.youtube.com/watch?v=XC7z8JU5jZU

https://youtu.be/fTZO-RWVH4Y
From about 0:16 you can see that someone is standing on the opposite side of the elephant. The baby looks very stressed, makes stereotypical movements and is obviously not relaxed.

https://www.reddit.com/r/aww/comments/ay4w3h/this_elephant_playing_the_piano_and_bobbing_his/
Here you can see that the elephant is wearing a chain and the mahout initially shakes the chain to move it to the rhythmic head movements. An elephant only does this if it has been taught it with the usual bad training methods.

https://www.youtube.com/watch?v=XC7z8JU5jZU
In some scenes you can see the foot of the mahout sitting on the head of the elephant and encouraging him to hit the piano.

https://www.instagram.com/p/BrYARqEA3cJ
Here you can see that the elephant is pulled by the ear and escorted to the piano by two people. The person to the right of the elephant also holds an instrument that resembles pliers in the other hand.

https://www.youtube.com/watch?v=hjsu3SGAdLs
"Duet with Elephant": here someone is shaking the chain of the elephant.